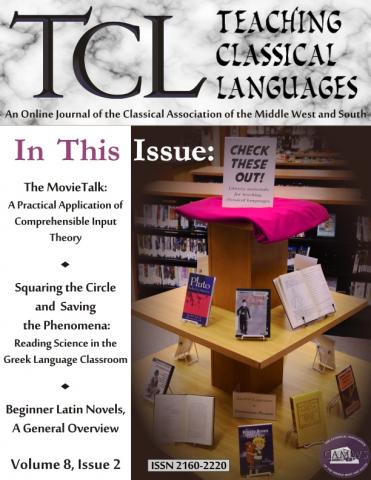 Welcome to Teaching Classical Languages (TCL). TCL is the peer-reviewed, online journal dedicated to exploring how we teach (and how we learn) Greek and Latin. TCL is sponsored by the Classical Association of the Middle West and South (CAMWS).

The MovieTalk: A Practical Application of Comprehensible Input Theory

Teachers new to Comprehensible Input can incorporate a MovieTalk, target language discussion using a movie short as inspiration, easily into their existing curricula. This paper summarizes the theory and research behind Comprehensible Input and describes the relevance of that theory to the activity known as MovieTalk. The paper also provides examples of MovieTalk scripts, guidance in creating one’s own MovieTalk script, and videos of MovieTalk demonstrations. Finally, the paper discusses the various options for delivery of a MovieTalk and activities to reinforce the vocabulary taught using the video.

Squaring the Circle and Saving the Phenomena: Reading Science in the Greek Language Classroom

Our students live in a world where scientific achievement and knowledge are profoundly significant, just as they were to the Greeks, and it becomes increasingly important to ensure that the language requirement is as enriching an experience as possible for all students, not only for students in the humanities, but also for those pursuing STEM tracks. Here we explore the significance of science in Greek culture together with the incorporation of Greek scientific texts in the beginning and intermediate Greek language classroom. Science (knowledge) was a seminal component of the Greek intellectual experience, and approachable “scientific” texts can be found in authors identified strictly as “scientists” (e.g., Euclid), as well as in the literary canon (e.g., Homer, Aeschylus). Appended is an extensive, generously annotated appendix of “scientific” texts drawn from a variety of authors and treating the major scientific discipline.

In recent years, some Latin teachers have followed the lead of their modern language counterparts who have written and published simple novels, in order to provide beginning students with more reading opportunities despite having a small working vocabulary. The result has been a flood of new resources. Now, many teachers are wondering which novels to choose, and how to use them in their classrooms. This article describes what beginner novels are, and how they can be used in Latin classrooms, regardless of level or method. This is followed by a survey of the novels that are currently available.