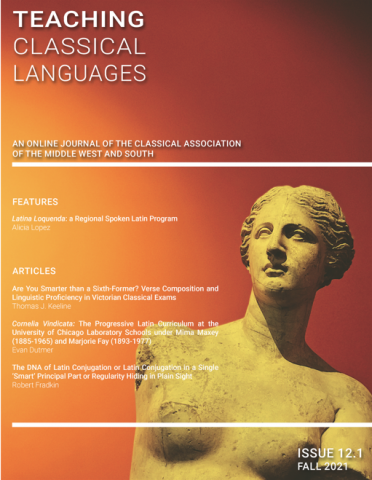 Welcome to Teaching Classical Languages (TCL). TCL is the peer-reviewed, online journal dedicated to exploring how we teach (and how we learn) Greek and Latin. TCL is sponsored by the Classical Association of the Middle West and South (CAMWS).

When talking to Latin teachers, I often hear that it is difficult for teachers to balance the push and pull between supporting grammar and translation-heavy curriculum and supporting the new and growing movement that is spoken Latin. In my high school experience, most teachers fall into one camp or the other and claim that there isn’t time to include the other curriculum. While translation and grammar give students access to thousands of ancient texts, spoken Latin teaches students how to use that grammar through composition, enriches Latin and English vocabulary, and promotes a greater understanding of syntax. Without a doubt, both methods provide benefits and complications for students, and offering a combination of the two allows students to get the most out of Latin. Creating an after-school spoken Latin program can be the perfect way to introduce spoken Latin to your students without taking class time from translation. In this article, I will first list some of the benefits of creating a spoken Latin program at your school or in your region. Next, I will explain how I started and ran Latina Loquenda, my own spoken Latin program. Then, I will describe the methods of creating and sustaining a spoken Latin program I have found to be most successful. Finally, I will allow access to all of my spoken Latin materials to create your own spoken Latin programs.

Are You Smarter than a Sixth-Former? Verse Composition and Linguistic Proficiency in Victorian Classical Exams

If assessing contemporary student achievement is a challenge, assessing the attainment of students from 150 years ago might seem almost impossible. While plenty of old classical examination papers have survived, we do not generally have students’ answers; we are thus left with literally nothing but questions. What could such students actually do? Some scholars have suggested that in the nineteenth century only exceptional students managed to achieve high proficiency in Greek and Latin. But this paper, drawing on an unnoticed—and thus far the only known—surviving set of student exam scripts, the responses to the prose and verse composition portions of the 1882 and 1883 entrance examinations for King’s College, Cambridge, shows that at least one kind of “average” student was able to reach an astonishing level of linguistic proficiency. These exam scripts allow us to assess past student attainment in a way that has been impossible until now, helping write a chapter in the history of classical education. They also offer a useful perspective on continuing debates about the classical curriculum today.

Cornelia Vindicata: The Progressive Latin Curriculum at the University of Chicago Laboratory Schools under Mima Maxey (1885-1965) and Marjorie Fay (1893-1977)

This essay is about one of the most systematic natural approaches to have been tried in the United States before the recent crop of communicative approaches to the teaching of Latin: the revolutionary reading-based curriculum developed by Mima Maxey and Marjorie Fay at the University High School of John Dewey’s University of Chicago Laboratory Schools in the first half of the twentieth century. An historical reevaluation of this earlier model for natural method Latin language learning—before the advent of modern linguistics and, in particular, Second Language Acquisition theory—offers much in the way of (i) inspiration and historical edification, (ii) some practical classroom application, and, finally, (iii) a cautionary note.

This article offers my fellow Latin teachers, prospective teachers, and interested (advanced) learners the opportunity to explore an alternative organization of Latin conjugation. The familiar facts of Latin conjugation have certainly not changed over the centuries. Still, a grammatical analyst’s and a language teacher’s (and learner’s) view of the relations among the dozens of forms in a verbal paradigm can change. Long-standing textbook tradition groups Latin verbs into four (and a half) numbered “conjugations” and Latin tenses into three “systems”: present, perfect, supine (using “tense” as a loose cover term for tenses and moods as well as participles and verbal nouns as equal members in the verbal system, all reviewed in Section 3, below). The facts of Latin sound and spelling, crucial to this presentation (with some comparisons to English), are reviewed in the Appendix with frequent references ([A] through [H] in square brackets) to it in the text itself. Readers already familiar with basic phonetics may not need these references, while other readers may find it useful to peruse the Appendix first before proceeding with the analysis and to prepare to flip back and forth. (The [H] section, devoted largely to English, supports the old adage that “you learn your language better by learning another language.”) The “conjugations” are of only limited usefulness as guides for forming these three tense systems since they point only to the present system with no reliable connection to the other two, giving the impression of myriad exceptions and irregularities. An awareness of Latin sounds and the ways Latin spelling represents them can go a long way to smoothing out that often bumpy path. The purpose of this article is to step back from textbook pages for a broader view of a classical Latin verb’s entire “inflectional profile” as a unified whole, of which the traditional conjugations are only a part. Four such “inflectional profiles” emerge that cut across the conjugations and highlight the system’s essential, though often hidden, regularity. The subject here is classical Latin as a synchronic system such as the toddlers Gaius or Publius might have intuited from their Julian or Vergilian parents’ first century BCE (refined) speech, only subconsciously aware of the elegant choreography of their consonants and vowels. The project arose out of my background in Slavic linguistics, in which field R. Jakobson’s 1948 analysis of Russian conjugation led to some advancements in Russian language pedagogy.